Obtain and purify four recombinant proteins and use them as antigens to produce polyclonal antibodies. Production efficiency and solubility were evaluated as proteins were expressed in two Escherichia coli strains genetically modified to favour heterologous protein production (BL21-CodonPlus (DE3)-RIL and BL21-pG-KJE8). 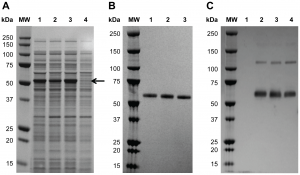 Parasite strains P. falciparum FCR3S1.2 and TM284S2 were cultured according to standard methods with 10% AB+ Rh+ serum added to the buffered medium (RPMI supplemented with Hepes, gentamicin and sodium bicarbonate). Genomic DNA from these parasites was purified using the EasyDNA purification kit (Invitrogen) according to the manufacturer’s protocol.

The BL21-CodonPlus-RIL strain purchased from Stratagene (California, USA) was used for protein expression. This bacterial strain has been engineered to contain a high copy number of arginine U, leucine W, and isoleucine Y tRNA genes for optimal expression of heterologous proteins from organisms with A/T-rich genetic sequences.

The cultivation was carried out with a stirring speed of 225 rpm. The pH value and the optical density at A600 of the cultures were systematically controlled. Aliquots (50 ml) of each culture were taken sequentially after the OD A600 reached 0.5 and IPTG (isopropyl-b-D-thiogalactopyranoside) was added to a final concentration of 0.1 mM to induce expression. Expression was carried out for three hours at 37°C and the bacteria were subsequently harvested by centrifugation at 4000 rpm for 15 minutes. Recombinant proteins were purified on glutathione-sepharose (Amersham-Pharmacia, Sweden). 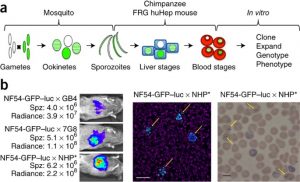 To analyze the recombinant proteins, aliquots of the soluble and insoluble fractions of the expressed proteins from each purification were mixed with an equal volume of SDS-PAGE loading buffer containing β-mercaptoethanol and boiled at 100 °C for 5 min. Denatured proteins were resolved on 10% acrylamide gels containing 1% SDS and visualized by Coomassie brilliant blue solution staining.

Recombinant DBL1α purified from FCR3S1.2 expressed with pGEX plasmids containing the wild-type DBL1 sequence or the codon-optimized sequence was further passed through a HiTrap-heparin column (Amersham-Pharmacia Biotech, Sweden). After washing with PBS tween-20 buffer, bound protein was released from the column with 2M NaCl and immediately dialyzed against cold PBS. Aliquots of the eluted proteins were subjected to SDS-PAGE. The binding of recombinant FCR3S1.2 DBL1α to blood group A antigen was studied using a solid phase assay system.

Protein expression was much more efficient in BL21-CodonPlus, the strain containing tRNAs that are rare in wild-type E. coli, compared to expression in BL21-pG-KJE8. Although BL21-pG-KJE8 overexpresses chaperones, this strain did not minimize inclusion body formation.

The use of genetically modified E. coli strains was essential to achieve high levels of expression of the four P. falciparum proteins evaluated and improve the solubility of two of them. The approach used here allowed us to obtain and purify four P. falciparum proteins in sufficient quantity to produce polyclonal antibodies in mice and a good quantity of two pure and soluble recombinant proteins for future tests.